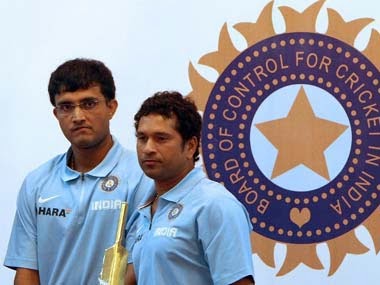 2) Indian Super League: Ganguly buys Kolkata franchise, Tendulkar gets Kochi: Sachin Tendulkar and Sourav Ganguly were among the host of high-profile winning bidders as the organisers of the much-anticipated Indian Super League on Sunday unveiled the eightfranchises for the event that is set to take Indian football by storm. The bid winners for the eight franchises of the league, which is scheduled to be held in September-November, was announced in Mumbai by organisers IMG-Reliance after evaluation of the bids by a seven-member panel. Tendulkar bagged the Kochi franchise along with PVP Ventures, which also owns a team in the Indian Badminton League while Ganguly, who bid by forming a consortium with Spanish League giants Atletico Madrid and businessmen Harshavardhan Neotia, Sanjeev Goenka and Utsav Parekh, won the Kolkata franchise. The Mumbai franchise went to Bollywood star Ranbir Kapoor and Bimal Parekh while another tinsel town biggie Salman Khan bagged the Pune franchise together with Kapil Wadhawan and Dheeraj Wadhawan of the Wadhawan Group.

3) Pallikal packs off Perry to enter Texas Open final: India's top woman's squash player Dipika Pallikal marched into the biggest final of her career after getting past higher-ranked Madeline Perry from Ireland in the $50,000 Texas Open at the Downtown Club. The 22-year-old World No.12 battled for 75 minutes, enduring three tie-break games, to beat eighth-ranked Perry 11-7, 11-13, 13-11, 10-12, 11-4 in the Women's Squash Association (WSA) Gold 50 event on Saturday.

4) Libya’s PM-designate resigned, citing gun attack: Libya’s Prime Minister-designate, Abdullah al-Thini, resigned on Sunday, citing what he said was an attack on him and his family overnight. In a letter addressed to the National Congress, Libya’s interim parliament, Mr. al-Thini, who was charged with forming a government on last Tuesday, said he and his family had been exposed to “a treacherous attack and shooting which terrified peaceful people in a residential area”. Mr. al-Thini said he and his government would continue to act as a caretaker administration pending the appointment of a new head of the interim government.

7) India becomes net steel exporter after 6 years:  India became net steel exporter in 2013-14 after a gap of six years and is likely to maintain the momentum in 2014-15 as producers are looking to dock more overseas shipment to tide over subdued domestic consumption. Total steel exports by India during the last fiscal stood at 5.59 million tonnes (MT), as against imports of 5.44 MT, Joint Plant Committee (JPC), a unit of the steel ministry, said in a report. India, now the world's fourth largest steel maker, had been a net steel importer since 2007-08 and the trend continued till 2012-13 with 7.9 MT of imports and 5.2 MT of exports. Before 2007-08, India's exports were more than its imports.