Friends… We have got a lot of requests from many of our facebook followers to post a mock/model question paper, which will help in preparation during this short period of exam. So here we have prepared a model question paper for Part-A ie, General Awareness Section which contains 25 Questions. These Questions have been prepared based on the last years question pattern. Importance has been given to Indian Constitution, History, Current Affairs and Science. 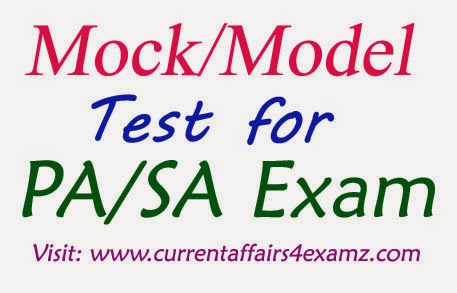 We hope these questions help you know for yourself which areas you need to work upon. Please remember that this is no way a complete solution for your preparation, but will serve as a support hand. We recommend that you take this test seriously and try to answer the questions based on the knowledge you have gained so far. Please don't google the answers or refer any books before you complete answering. Others ways this will be of no use. After you have attempted all the questions, try to post the answers to all 25 questions as comment below. By 8 PM today, we will post theanswers here itself so that it will provide a true picture of your preparedness. The name of all those who have got more than 12 questions correct will be posted in our facebook page and here. See you then :)  Good Luck! More Tests for all sections will be posted soon...

"The more questions you attempt, the better your preparation for the real test"

1) Which part of the Indian Constitution has been amended only once so far?
(A) Emergency provisions
(B) Fundamental duties
(C) Power of judiciary
(D) Preamble

4) Who amongst the following is the author of the book Letters from India?
(A) Rob Young
(B) Nani Palkiwala
(C) Catherine Young
(D) Cleopatra Hanssens

7) The finest specimens of Pallava architecture are?
(A) Temples of Madurai
(B) Temple of Tanjore
(C) Rock –cut Temples at Mahabalipuram
(D) Kailashnath Temple of Ellora

9) Which of the following gases are given out during photosynthesis?
(A) Nitrogen
(B) Hydrogen
(C) Oxygen
(D) Carbon dioxide

10) Which among the following countries has hosted the T20 Cricket World Cup 2014?
(A) India
(B) Sri Lanka
(C) Pakistan
(D) Bangladesh

11) Cadmium accumulation in the body leads to hypertesion, heart enlargement and death this is mainly due to
(A) Cigarette smoking
(B) Drinking water
(C) Drinking wine
(D) Drinking milk

13) Which of the following gases forms the largest part of air?
(A) Carbon Dioxide
(B) Nitrogen
(C) Argon
(D) Oxygen

15) What is the script of Ashoka’s inscriptions:
(A) Gurumukhi
(B) Hieroglyphics
(C) Dev Nagri
(D) Brahmi

18) Name the inventor of the ubiquitous automatic weapon AK-47 who died at the age of 94 recently?
(A) Mikhail Gorbyavech
(B) Kishav Gabriel
(C) Kilternik Remnik
(D) Mikhail Kalashnikov

22) Who commented that the Cripps Mission was a post-dated cheque on a crashing bank?
(A) Mahatma Gandhi
(B) Jawaharlal Nehru
(C) Subhash Chandra Bose
(D) Sardar Vallabhbhai Patel

Prepare for the test with free GMAT Sample Questions. Improve your GMAT score with full explanation of GMAT sample questions.