"Send a postcard and receive a postcard back from a random person somewhere in the world!"

‘Shashank received 137 Postcards and sent 144 Postcards so far. He has also received currencies  from various countries through direct swapping. He is very happy in Postcrossing than facebook etc. ...’ While Ramesh Hegde was eagerly explaining this to our roommates, I was lost deep myself updating some VB stuff.
It was on the Third day, I got time to ask Ramesh what Postcrossing really meant. ‘Just go to postcrossing.com, it works even in Siffy network’ - Ramesh said.

Yes!
It is really amazing to feel the warmth of receiving a Postcard through our Post office when we are thinking  'gone are the days' of Postman delivering a Postcard and new generation think that mobile and email are the only means of communication.
www.postcrossing.com 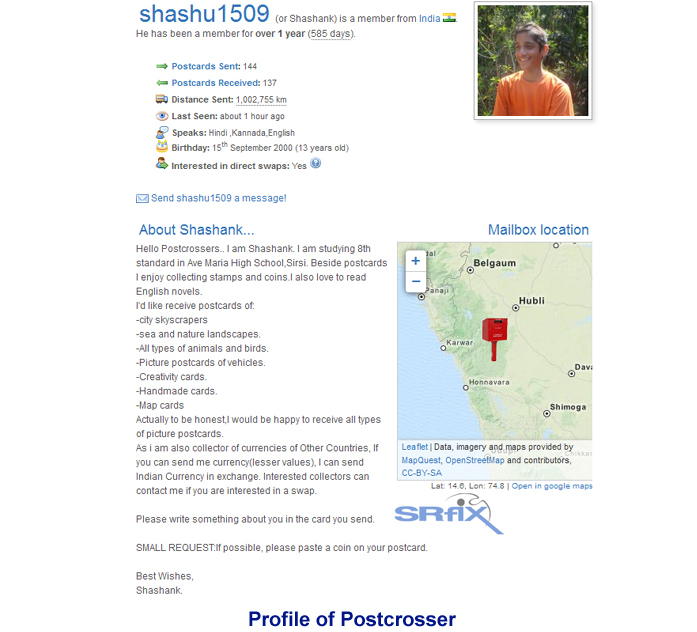 Postcrossing is the union of the words "postcard" and "crossing" and its origin "is loosely-based on the Bookcrossing site". However, the "crossing" or exchange of postcards works in a different way. A member sends a postcard to another Postcrosser and receives a postcard back from a random Postcrosser. Exchanges between the same two members only occur once; although direct swaps between members happen, they are not part of the official happenings on the site. The project is completely free and anyone with an address can create an account. However, the postcards themselves and postage fees to mail them are the responsibility of each user. 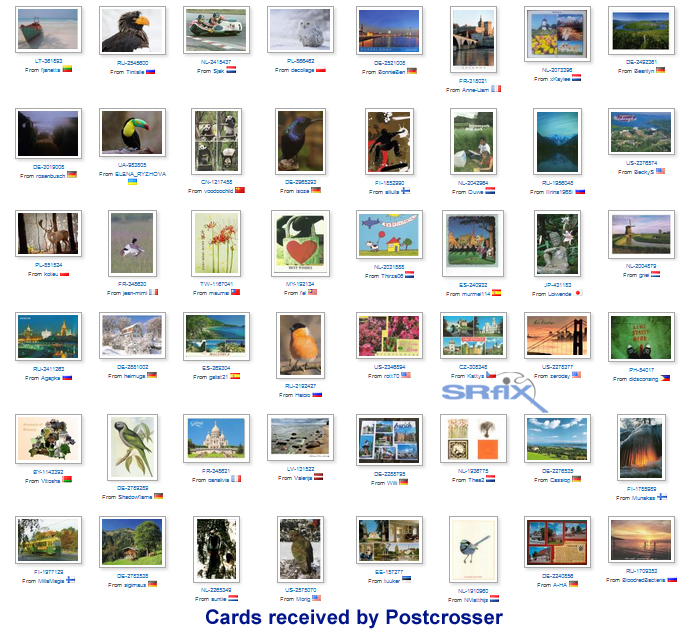 Project by Paulo Magalhes
The idea for the project was created by Paulo Magalhes, who started the site on July 14, 2005. The motivation was based on the fact that he liked to receive mail, especially postcards. “The element of surprise of receiving postcards from different places in the world (many of which you’d probably never have heard of) can turn your mailbox into a box of surprises – and who wouldn’t like that?”
The project started initially as a hobby for Magalhes, but its unexpected success revealed that the idea was more popular than he ever predicted. He initially hosted the project on an old computer housed in a clothes closet at his home; this setup quickly was shown to be insufficient. Based on word of mouth, the project quickly expanded over the Portuguese borders where the project was developed.
Over time the project received attention from the media which contributed to its growth and popularity. Postcrossing reached its first million exchanged postcards on April 11, 2008 and has since grown even more rapidly. It reached the second million on February 26, 2009, with a postcard that traveled from Germany to Norway. The third million was reached on September 24, 2009 with a postcard traveling from Finland to Slovenia. The fourth million was reached on March 28, 2010 with a postcard traveling from the Czech Republic to the Netherlands.
As on April 14 2014, Postcrossing has  470,308 members in 213 different countries who had registered and exchanged over 23 million postcards that have traveled over 117 billion kilometers.
The highest concentration of Postcrossing members reside (in order) in the United States, Russia, China, Taiwan, the Netherlands, Germany, Poland, Finland, Belarus, Ukraine and Brazil. Globally, most Postcrossers reside in North America, Europe, and East Asia. Of particular note, Postcrossing is popular in eastern European and former-Soviet states. As of January 2012, more than a quarter of the combined total of postcards were sent from Finland, Russia, Estonia, Latvia, Lithuania, Belarus and Ukraine.
How it works ?
The main idea is that if a member sends a postcard he or she will receive at least one postcard back from a random Postcrosser somewhere in the world.
The first step is to request to send a postcard. The website will display, and send the member an e-mail with, the address of another Postcrosser and a Postcard ID (e.g.: US-787). The Postcard ID uniquely identifies that postcard in the system. The member then mails a postcard to that Postcrosser and writes the Postcard ID on it. The Postcrosser receives the postcard and registers it using the Postcard ID that is on the postcard. At this point, the member is eligible to receive a postcard from a different Postcrosser.
Initially each member can have up to 5 postcards traveling at any single time. Every time one of the sent postcards is registered, that Postcrosser can request another address. The number of postcards allowed to travel at any single time goes up the more postcards a member sends.
The Postcrossing system allows for the same two members to exchange postcards only once. By default, members will exchange postcards with countries other than their own; however, the users can decide to exchange postcards with other users in his or her own country.
A small percentage of mailed postcards get lost during their travels; others may arrive with the Postcard ID unreadable and are difficult to register. There are also members who become inactive while postcards are on the way to them. The system behind the website accounts for all these factors and compensates active members by attempting to reduce the difference between the number of sent and received postcards of each member. 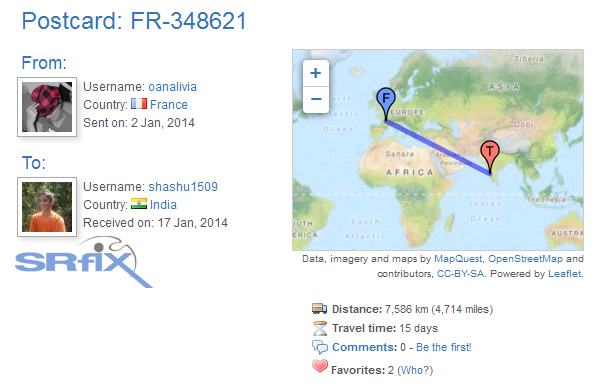 Journey of a Postcard
Direct swaps

Many Postcrossing members exchange postcards between them besides exchanging the official Postcrossing ones. These are called direct swaps. These are exchanges organized by the Postcrossing members themselves, often in the  forum and are not tracked by the system and hence do not have Postcard IDs.
To help members know if another member is available for private swaps or not, members are allowed to configure that on their profile. This way, members who are interested in doing direct swaps are easier to find and members who do not wish to participate can clearly state that too.

Steps:
1. Register your name in postcrossing site.
2. Request an address from the site.
3. Mail a Picture Postcard (Available at HPOs) to the address along with ID generated through the system affixing Rs 12/ Stamp
4.Wait to receive the Postcard.
5.Register the received Postcard in the system.

Benefits
We get to know :