Dear Friends.. Here is the Solved Questions of General Awareness Section from PA/SA Exam 2014 held in Kerala Circle in the afternoon of 27 April 2014. We would like to thank Vishnu Mohan, Hashif Ali M and Kushal Garg from the bottom of our heart for sharing the questions with us. On behalf of our team and readers we wish them all the very best and success in the exam. 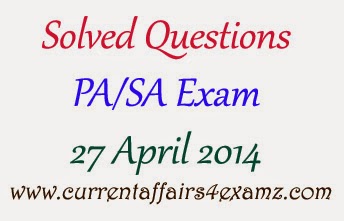 4) Nitrogen is available for plants in the form of:
(A) Nitrogen Gas
(B) Nitrogen Dioxide
(C) Nitrate
(D) Nitric Acid
Ans. (C) Nitrate

6) Natural Rubber is a polymer of the following unsaturated hydrocarbon:
(A) Choloprene
(B) Neoprene
(C) Isoprene
((D) None of these
Ans. (C) Isoprene

19) Which of the following is the highest mountain peak in South India:
(A) Ana Mudi
(B) Doda Beta
(C) Mahendragiri
(D) Dhugarh
Ans. (A) Ana Mudi

21) Which of the following state is termed as "God' sown country"?
(A) Kerala
(B) Andhra Pradesh
(C) Karnataka
(D) Tamil Nadu
Ans. (A) Kerala

22) Who among the following is the chief Election Commissioner?
(A) V.S Sampath
(B) H.S Brahma
(C) Nasim Zaidi
(D) None of these
Ans. (A) V.S Sampath

Answer Key for other sections and complete Question Paper will be posted soon.. Remaining Circles question papers please share with us at currentaffairs4examz@gmail.com & sapost2@gmail.com

Article 45 originally mandated the State to provide free and compulsory education to children between the ages of six and fourteen years,

Wrong..it was made a fundemental right in 82 nd amendment 2002.
http://indiacode.nic.in/coiweb/amend/amend86.htm

Sir. The question Start With "To Provide" Not "To Get", So It Will Become Under Fundamental Duties(of parants),K Thanks.......

Lona
(Sport: Kabaddi)
Definition
A bonus of two points awarded if the entire opposing team is out.