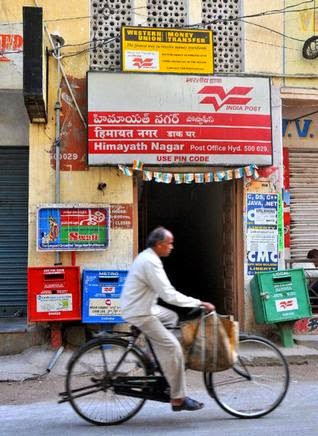 India has the largest postal network in the world with over 1.55 lakh post offices, most of them in rural areas. The network has grown seven-fold since Independence, with the focus of this expansion primarily on rural areas. Yet, the growth in terms of numbers and reach is slowing down.
As in the rest of the world, the post office is on the wane in India. Unless it reinvents itself and takes on new roles to meet emerging expectations and needs, it is entirely possible that we may see them on their way out, at least in the present form. Some new products and services, including Speed Post, Internet banking for savings accounts, ‘e-post’, ‘i-money orders’ and so on have added a contemporary resonance to the post office.
The Finance Minister announced earlier this year that all post offices in the country would be using modern technology by 2015 under the IT modernisation project for the Department of Posts.
At least in the cities, one does notice attempts to add a fresh coat of red paint to post offices, though most of them still sport that familiar musty odour, shaky furniture and blotches of glue that have made a mess of the space meant for pasting stamps, writing letters and filling up forms.
Regardless of the negative connotations that mark the atmosphere in the post office, there is the ubiquitous postcard about which much could be said. Modern toolsThe gates of the World Wide Web are now open before us, and the mobile phone has turned the art of communication into the SMS. Twitter has meanwhile reduced our eloquence to 140 characters, and Facebook has restricted our predilections to ‘Like’ and ‘Unlike’. WhatsApp has brought a new lexicon to our idiom. Yet, the post card still seems to symbolise the star player in establishing contact among relatives, friends, siblings and acquaintances.
Along with such changes sweeping our lives, the art of letter-writing is on the wane. In the good old days, letters bonded people -- parents, siblings, friends, acquaintances -- regardless of where they were stationed. Those little homilies and personal touches packed the post cards.
The elder children in a family would usually play the role of an amanuensis, taking down dictation from their parents and reading out the contents of the replies to them. The innocent pleasure they displayed when lending their ears to the contents was to be seen to be believed.
People eagerly waiting at the doorstep to greet the all-important postman was an occasion to savour.
The bell of his cycle was often the harbinger of good news. The capped and uniformed postman would puff up in importance as he surveyed the anxious faces and pulled out a sheaf of letters and post cards from his worn-out, weather-beaten bag. It was as if he was pulling out some long-lost bounty from the heavens.
The bespectacled patriarch would clear his throat and after some preliminary discussions on the domestic front and struggling with his rusted spectacles hanging precariously on the bridge of his nose (thanks to a thread wound around his ears), would set to write his letter on the yellow post card.
Every centimetre of the card, including the space on top of the stamp, would be utilised. The treasured Parker, Sheaffer, Waterman or Doric pen with its quaint nib would invariably run out of ink. Unable to open the barrel of the pen, he would open an old Ink-bottle and gently dip his pen into the bottom and resume his writing.
He would wake up early in the morning and write letters on postcards to all his near and dear ones and update them on recent family happenings.
Another quaint custom of those days involved the tagging of all postcards and sundry bits of paper on a mounted long metal wire and bunching them by month and year. The stored post cards served as a sort of archives to be dipped into whenever the need arose.
It is unfortunate that these simple pleasures of communication are lost on us today thanks to modern means of “touching base”.
The pleasures of expectation and eager anticipation no longer seem to exist in the humdrum of our lives today. Gone with the art of letter-writing are many a nuance of communication that brought a smile to one's lips, a lump in the throat, a tear to the eyes or a dimple to a romantic cheek! Nothing, it would seem, is left to the imagination anymore.
One wonders whether Gen-Next will have the time and patience for such long-drawn methods of communication. Truth to tell, even the elders among us are beginning to find the electronic means of interacting more convenient and user-friendly.
Some time ago the media sang the dirge of the telegram. The sentiment weighed heavily on me too, and I made a visit to several post offices in the city where I live, wondering how long more they would be around.

Source: http://www.thehindu.com/
Share this article :
Posted by Admin at May 04, 2014
Email ThisBlogThis!Share to TwitterShare to Facebook
Labels: DOP News