Friends.. Here is the solved questions of General Awareness section from Postal/Sorting Assistant Exam held at Jharkhand Circle on 4 May 2014. 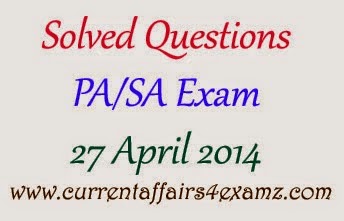 5) What is the name of the person that controls a football match?
(A) A refree
(B) An umpire
(C) A spectator
(D) A goalkeeper
Ans. (A) A refree

6) Which of the following sultans had greatest number of slaves in his court?
(A) Balban
(B) AlauddinKhilji
(C) Mohammed-bin-Tughlaq
(D) FerozTughlaq
Ans. (D) FerozTughlaq

14) Which of the following games is not included in the Olympic Games?
(A) Cycling
(B) Archery
(C) Cricket
(D) Skiing
Ans. (C) Cricket

15) The head of the military department under the recognized central machinery of adminstration during Akbar's reign was
(A) Diwan
(B) Mir Bakshi
(C) Mir Saman
(D) Bakshi
Ans. (B) Mir Bakshi

22) Who among the follwing was a founder of Swaraj Party?
(A) Vallabhai Patel
(B) Rajendra Prasad
(C) CR Das
(D) Narendra Deb
Ans. (C) CR Das

24) The rings of which planet produce their own rain that falls onto the planet which has a major impact on its atmosphere?
(A) Venus
(B) Mercury
(C) Saturn
(D) Mars
Ans. (C) Saturn

25) Where is the National Academy of Agricultural Research Management located?
(A) Dehradun
(B) Hyderabad
(C) New Delhi
(D) Itanagar

Please upload the answer key of Section ,B, of jharkhand circle.