Disclaimer : -The Postal Assistant/Sorting Assistant Examination Key is prepared by Akula. Praveen Kumar, Sub Postmaster, Papannapet SO-502303 (Medak Division Mob no. 9849636361), Telangana State, in good faith of Postal Assistant exam aspirants. Author of blog does not accepts any responsibility in relation to the accuracy, correctness of answers or otherwise, of the contents. 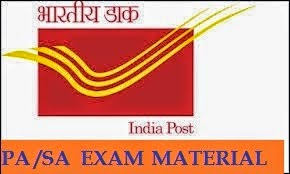 1) Bleeding of gums and loosening of teeth is caused due to deficiency of:
Ans.: C : Vitamin C

2) Which of the following is not present in blood?
Ans:  D : Placenta

3) A stick immersed in water appears bent due to the phenomenon of:
Ans: C :  Refraction of light

4) This area is termed as territorial water and resources therein belonging to the nation:
Ans: B:  Oceanic area upto 19.2 nautical miles from the coast

5)  Which state of India is the largest producer Bajra?
Ans: A:  Rajasthan

6)  Kudremukh mine deposits known to be one of the largest in the world is located in the states of:
Ans: B : Karnataka

10) The Prime Minster of which country is recently facing charges of negligence over a govt rice subsidy scheme?
Ans. (B) Thailand

11) Which of the following three countries elected/appointed their Prime Ministers as recently as in Feb, 2014:
Ans. (B) Thailand, Italy, Nepal

12) Who is the present governor of the state of Karnataka?
Ans. (A) Hans Raj Bhardwaj

13)  Identify the state with bicameral legislature:
Ans. (B) Maharashtra

17)  With which game is the term 'Double fault' associated?
Ans. (A) Lawn Tennis

19) Which article of the constitution of India deals with the formation of new states and alteration of areas, boundaries or names of existing states:
Ans. (B) Article 3

20) Who has been vested with power by the constitution to permit any member of parliament who can not adequately express himself/herself in Hindi or in English to address the house in his/her mother tongue:
Ans. (D) Both A and B

21) What eligibility criteria for age for election as Vice president of India?
Ans. (A) Should have completed the age of 35 years

22) The Great emperor Kanishka belonged to which dynasty:
Ans. (A) Kushana

23) Which of the following was not written by Kalidas?
Ans. (B) Laghujatakam

24) Which of the following is credit rating agency?
Ans. (B) ICRA

Ans: D : 6 times more the area of the old rectangle

36.Sanya Can embroider a bedsheet___

37.A train travels at a certain average speed_____

38.shyam is travelling on his cycle and has calculated _____

I'm not sure all answers r correct

There will be standard cut off marks from each section.

Which is ur catogery?

i think some answers are not correct like 86 n 96

I'm not sure all answers r correct

I am belong to obc catogary but at the time of applying for this post it will given as general catogary. What i do now plze give me a sugestion. Its my requst with you

sir, when does the postal assistant result 2014 will be announced....

They had clearly mensioned that cut off will be 10 marks in each paper. you have to score min 10marks in every part then nly you will be eligible for next round.

Hi Good morning karnataka aspirants will u please share the secure marks, i secure 69 marks from OBC catagery. so please share marks of yourselves.

Hi...Good morning
i secure 60 marks belongs to obc category...is it any chance to can i get job

sir, i did one mistake in omr sheet i have to write booklet number in OMR sheet but i forget to shading the circle is it any problem to value the paper..
plz reply me sir....

hi devendra can u send to my mail.the correct answers if u hav.pls.my booklet in B.and my mail is saiprakashkulkarni6@gmail.com.

Hi good evening friends pls one question in GK doubt. The state in largest producing in crop BAJRA is Gujarat or Rajastan. please reply any one .

Ok Mahendra thank u so am badluck my option is Gujarat k k next all karanataka students like ur friends they are postal exam secure score pls inform me.

some mistakes in english key...like adverbs , i had taken bath etc is it?

in the notification they are given that cut off mark is 40% in every part... that is 10 marks in each.

@ RUKMINI N - ANSWER FOR QUSN 83 MAY BE DEHRADUN ie OPTION 'B'. AND ANSWER FOR 96 QUSN IS CORRECT ie SISTER. anybody knows soln for qusn no 82??

i have scored 54 marks obvc category in karnataka

hello any one please tel me is we have any second round? because i not in shortlist for exam-II